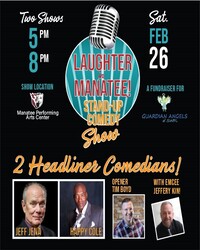 We hope you'll join us and sit back and laugh with your friends!
• Come early and socialize.
• After the Show, meet the Comedians in the lobby!
• A portion of the proceeds will benefit The Guardian Angels of SWFL.


Start Time
Doors open 45 minutes prior to event start time. We encourage you to come early, visit with your friends and hand-selected vendors, purchase beverages and relax.


Food and Drinks
• Cash bars will be available. No drink minimum. Cash & credit cards accepted.
• There will not be food service at the event.


Show Flow
• Once the doors close, we ask that you please remain seated through the show.
• Continual show time is approximately 80 minutes. No intermission.


Photos/Video/Audio Permission and Tickets
• By purchasing a ticket, you are simultaneously providing authorization for photos, video and audio to be recorded of you and your guests at the event. These photos may be used for promotional purposes and at the discretion of Knock Out Marketing, LLC and the Manatee Performing Arts Center.
• Tickets are are non-refundable. Should something arise that prohibits you from attending, please feel free to give your tickets to a friend under the ticket holder's name.
• Knock Out Marketing reserves the right to substitute talent should safety become an issue.
* Clean Comedy is a genre that is generally free of: heavy profanity, obscenity, toilet humor, sexual content, and similarly objectionable material.


About The Talent
Jeffery Kin - Emcee

Our energetic and witty master of ceremonies is Sarasota’s own Jeffery Kin, an award-winning actor, director, playwright, and teacher. As an actor, Kin has performed such roles as Max in Lend Me a Tenor, Jerry in The Full Monty, Guido in Nine, Oscar in Sweet Charity, and Salieri in Amadeus. He has directed and produced many award-winning shows. As a playwright, three of his plays—Anna, Leona & the Lady Luck, Always a Part of Me, and Smoking— have won numerous awards and have been produced in venues around the country.

Tim Boyd has headlined every comedy club in South Dakota (1) and Nebraska (1). His clean comedy relates well with everyone from 12 to 112. He finds the laughter in everyday situations that most people just let go. For instance, do they really need to put items on sale at the Dollar Tree and why do homeless people love being outside so much? Tim’s unassuming manner will put you at ease to sit back and enjoy looking at the absurd things that happen in life that we generally don’t notice.

Tim and his wife have been married for 21 years and the have 5 kids. Their oldest is in college and their youngest is in kindergarten. You may assume it’s a religious thing. It’s not, they are just kind of dumb.

Tim’s start in comedy happened because a group of his friends got together and bought him tuition to a comedy class where he had to perform in front of 300 people. He took that opportunity and in just two years turned it into 2-3 performances a month. He recently was a finalist in Visani’s First Comic Standing Competition. Tim has opened for nationally touring comedians Erica Rhodes, Rahn Hortman, and Joey ILO.

Jeff Jena is one of the top corporate and cruise comics working today. His decades of live performance experience and over forty national television shows, both as an actor and comic, give him the ability to work for any audience. His experience as both a writer and a performer give him the experience to know exactly how to present your event with a hilarious evening of comedy. His recent television appearances include Comics Unleashed with Byron Allen and the Bob and Tom Show on WGN cable. His newest work, "I'm Only Saying This Once" is available on major music download sites.

In his years as a stand-up comic Jeffrey Jena has appeared on over forty national television shows, including Comics Unleashed, The Bob and Tom Show, The Dennis Miller Show, HBO, MTV, Evening at the Improv, NBC Friday Night and The Showtime Comedy Club Network.

As an actor he has been seen on Murder She Wrote and Hunter as well as appeared in shows with Jenny McCarthy, Weird Al Yankovic and in several films including, Raising the Dead with Allison Eastwood. Jeff has played over 1,000 venues including clubs, Las Vegas, and cruise ships. He has opened for acts as varied as Barry Manilow, Jeffrey Osborne, The Temptations, Delbert McClintock, and Englebert Humperdinck.

Jeff has also written jokes for a wide variety of comedians including Ron White and Marty Allen. Jeff is also a frequent guest on the Bob and Tom Show, a nationally syndicated radio show and the Mark Germain Talk Show in Los Angeles. In addition he had appeared at hundreds of corporate functions and golf outings.

Happy Cole began his stand-up career in Tampa, Florida. His high-energy delivery and fast-paced humor have long made him a favorite at comedy clubs, colleges, corporate events and on cruise ships.

Cole got a big break when he was invited to perform at the Montreal International Comedy Festival “Just for Laughs”, now considered the biggest, most prestigious comedy festival in the world. His appearances there were so triumphant and stellar that the Montreal Gazette cited Happy as one of the “standouts in the best jokefest ever.

”Moreover, his success at the Festival drew the attention of all kinds of major figures in the entertainment industry, including the producers of “Black is…” an award-winning CBC documentary series. This led to appearances on such U.S. television shows at NBC’s Friday Night Lights and the nationally syndicated “Showtime at the Apollo.” It also led to an invitation to perform at the Murphy’s Cat Laugh Festival in Kilkenny, Ireland hosted by Bill Murray.

Among Happy’s other television credits are the ACE Award-winning, Caroline’s Comedy Hour, Comic Strip Live, Evening at the Improv, and Comedy on the Road. In addition to these and other stand-up programs, he has also accumulated TV credits as an actor, including a recurring role on Nickelodeon’s, Clarissa Explains it All and Fox’s Sea Quest. He has completed work on a pilot for Big Ticket Television and the UPN Network call “Momz Home.” Cole was cast as the lead in two independent films, The Horizon Bleeds and Harmony’s Run . Happy Cole headlines over 300 live dates a year and has been featured in concert with acts ranging from Sinbad and Jim Carrey to The Temptations and Julio Iglesias. Happy has appeared at the HBO USCAF Comedy Festival and was nominated for the Best Stand-Up Award.